Public Display of Lightning Strikes (the story behind “Streetlight Storm”) 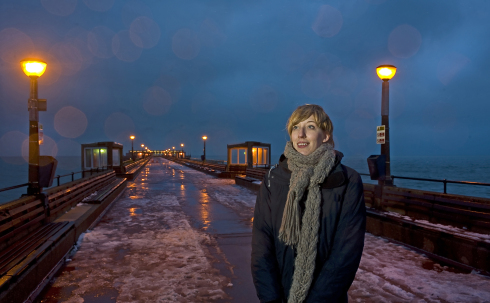 Scottish Artist Katie Paterson wanted to recreate the feeling of a lightning strike. But she didn’t want to do it in the normal theatrical way by using strobes connected to a random sequence generator. She wanted to display REAL TIME lightning strikes – and not in a theatre but on an English pier that jutted out into the English Channel. And she wanted to do this at Christmas time.

We had a look at this and immediately looked at the many types of lightning detectors available on the market. At first, they looked promising. Then we ran into a major problem – the ranges of these detectors in a few hundred kilometres. In winter, there is not lightning within their range.  We needed to detect lightning strikes at a range of thousands or kilometres since most thunderstorm activity is over Africa, and occasionally over the Mediterranean. All of the activity was out of range by an order of magnitude or more!

There just wasn’t any off-the-shelf solution available at any price let alone at a price that a young artist could afford. So we engaged in some brainstorm, out-of-the-box, creative thinking, or blue sky thinking. The results were truly astounding. We built a lightning detector that used a small outdoor antenna, a DolphinEar amplifier which we altered, and some digital wizardry. To it we added two extra halogen light bulbs into every lamp post on the pier (over 22 of them), Each lamp post was connected to a small controller that received a signal from our lightning detector. Every time a lightning strike was detected every one of those 22 pairs of halogen lamps flashed. The overall  effect was a sudden burst of white light on the pier that outshone the normal light of a sodium vapor street lamps. The project was called ‘Streetlight Storm’. 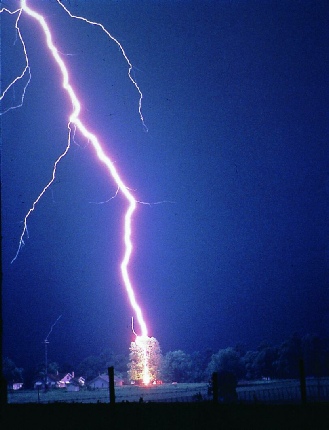 From a technical point of view we were able to pick up lightning strikes out to at least 12,000 miles from the pier installation! That was determined by looking at known lightning storms in various regions then following the times the strike intensity and frequency changed. Propagation of electrical signals is somewhat dependent on  reflections and absorptions in the ionosphere with best reception during darkness.  By following the earths terminator line (time of dawn or dusk) we saw increases where there were thunderstorms. Initially we were able to confirm reception of storms in Mid-Africa and the Mediterranean. Later, we confirmed lightning strikes in South America. We had a true hemispheric lightning detection system in our hands.

As we monitored the storms it became apparent that we also could see what looked like echos of certain lightning strikes. Lightning strikes have many features that are unique.  When we see a strike with our eyes we see a single flash. In reality, there are multiple strikes – anything from 4 to 16 very quick flashes which we can detect and see visually on an oscilloscope.  Some of the stronger of these was repeated at an interval that indicated we were seeing the same strike  travel around the earth at least once – an echo of the stronger strike.

The development of the techniques and equipment used on this project have potential uses for monitoring the environment as the climate warms. NASA maintains several satellites that look down for upper cloud flashes and there are several networks that report lightning activity. But as far as we know there is no facility for extremely long range detection.  Three of more of the stations we developed could provide lightning detection and ranging information at a very low cost.

Streetlight storm has since been exhibited in London, New York and at other locations including the UK’s prestigious Royal Geographic Society. Recently, we decided to located the main receiving station near Cambridge, England in order connect to more locations. This provided the capability of having simultaneous displays in as many as 20 cities worldwide.